Dinner and a Show

Posted on December 24, 2009 by faranginbangkok

Thailand is one of the few countries where the locals celebrate their heritage and culture as much as the tourists. This has always been surprising to me based on the massive number of tourists in this country. Last night was a perfect example, I went to an Essan (Northern) style restaurant on Sukhumvit Soi 36 called the Vientiane Kitchen: http://www.vientiane-kitchen.com/ 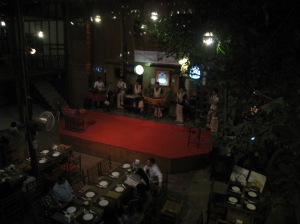 The decor is Nipa Palm, meaning a Northern Style House. The food was great- whole fish in spicy sauce, fresh veggies and noodles. There is a “show” of northern style music, it is a large band playing wooden instruments made primarily from bamboo. The music sounds a bit like Mariachi in that you can enjoy it without understanding any words, there are long instrumental interludes. There were also dancers in traditional Thai dress and some Thai sword fighting (with actual swords).

What struck me was the number of Thai business men coming to eat and see the show- also a large number of Thai people holding their end of year parties and birthdays. How does this translate to my culture? Where do we go in America to see this kind of show or our heritage? We have lots of shows, Beach Blanket Babylon in SF and the vast number of Broadway plays in NYC. We have country music (wretch in mouth).

What makes Thailand unique is the ubiquitous culture that is adapted to different parts of the country. What is endearing is seeing Thai business men taking pictures of a “show”. America is wonderful for our diversity, we need many shows to express our culture. Thailand has one culture and they like to see it and celebrate it for more than just the tourists.

I began working in Bangkok during 2008- a time that featured a great deal of political unrest in Thailand and particularly Bangkok. I had lived in San Francisco for 15 years and was working on a project in Thailand. Generally, I spent 2 weeks in Bangkok and then 3-4 weeks in San Francisco. Did Bangkok begin to feel like home? Yes, and No. Bangkok and the Thai culture forced me to feel many things, the change in culture and environment was so dramatic it forced the decision- embrace or ignore. I embraced and made Bangkok my home and base in 2009. I have enjoyed living in Bangkok, experiencing Thailand and the entire ASEAN region. I moved to Singapore in 2016...fallen behind on this blog since.
View all posts by faranginbangkok →
This entry was posted in Bangkok, Food & Restaurants, Thailand and tagged bangkok Essan. Bookmark the permalink.