What’s with the wires?

Posted on January 2, 2010 by faranginbangkok 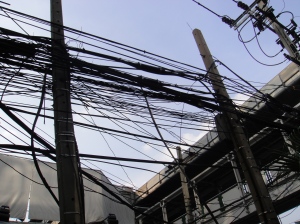 One constant source of fascination for me has been the massive number of wires on the poles in Bangkok. In the USA there will be 2-3 wires attached to poles, visit Germany and all wires are underground.

What’s with all the wires? There are times when wires are just dangling, barely above head height. Fires hazards? What about the heavy rains and all these wires?

I asked around a bit, with some help of Thai speaking friends. With the massive amount of building that is taking and has taken place, large numbers of wires were run down the poles on the small streets (Sois) to reach the main junction boxes on the larger roads. When a new wire is strung, old wires aren’t removed. The new wires are just wrapped around or on top of the old wires on the poles, some of the old wires just break and dangle.

Dangerous? I don’t think and have never seen anyone injured, but I haven’t grabbed a hold of any wires and don’t intend to.

This is just one of the reminders of the differences in a fully developed country and an emerging country. No judgment, just a difference; and a big job for someone to identify the live wires and eliminate the dead wires.

I began working in Bangkok during 2008- a time that featured a great deal of political unrest in Thailand and particularly Bangkok. I had lived in San Francisco for 15 years and was working on a project in Thailand. Generally, I spent 2 weeks in Bangkok and then 3-4 weeks in San Francisco. Did Bangkok begin to feel like home? Yes, and No. Bangkok and the Thai culture forced me to feel many things, the change in culture and environment was so dramatic it forced the decision- embrace or ignore. I embraced and made Bangkok my home and base in 2009. I have enjoyed living in Bangkok, experiencing Thailand and the entire ASEAN region. I moved to Singapore in 2016...fallen behind on this blog since.
View all posts by faranginbangkok →
This entry was posted in Bangkok, Thailand. Bookmark the permalink.

1 Response to What’s with the wires?