Posted on February 16, 2010 by faranginbangkok

I headed to Chinatown.

An interesting change for 2010- many people are wearing pink colored shirts instead of the traditional red due to the political situation in Thailand. The UDD (United Front for Democracy against Dictatorships) are the “red shirts” in Thailand, many large protests are scheduled over the next 2 weeks with the UDD hoping to have 1,000,000 red shirt clad protestors on the streets on February 26. To avoid appearing to support a political party- people wore pink shirts, a color of the King.

Much more on politics to come.

Approximately 12 blocks of Chinatown was closed for the celebration- there were stages, street venders and loads of great food. It was not a party atmosphere, there was no alcohol being served on the streets- more an opportunity to walk around and celebrate the year of the tiger.

The King’s daughter was in Chinatown, leading the opening ceremony and visiting many of the vendors. It was fun to see the respect the Thai people paid to her- her motorcade and police detail would bring hundreds of people out to clap as she passed- when she would stop and enter a store or street vendor’s stall, people would gather and wait long periods for her departure, just to catch a glimpse of her. 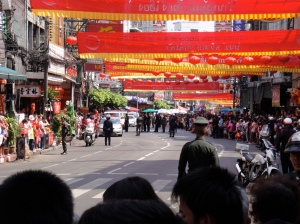 Waiting for the King's Daughter- the left side of the street is closed, her cars and police detail can be seen, she is inside a shop

I began working in Bangkok during 2008- a time that featured a great deal of political unrest in Thailand and particularly Bangkok. I had lived in San Francisco for 15 years and was working on a project in Thailand. Generally, I spent 2 weeks in Bangkok and then 3-4 weeks in San Francisco. Did Bangkok begin to feel like home? Yes, and No. Bangkok and the Thai culture forced me to feel many things, the change in culture and environment was so dramatic it forced the decision- embrace or ignore. I embraced and made Bangkok my home and base in 2009. I have enjoyed living in Bangkok, experiencing Thailand and the entire ASEAN region. I moved to Singapore in 2016...fallen behind on this blog since.
View all posts by faranginbangkok →
This entry was posted in Bangkok, Culture, Food & Restaurants and tagged Bangkok, Chinese New Year 2010. Bookmark the permalink.