With protests in Bangkok and slinging of blood dominating the news headlines and “are you okay” emails filling my inbox, I thought it best to write a bit about some of the great parts of being in Thailand and the culture. Oh, and everything is calm and organized here. To the culture of Bangkok and Thailand, I participated in providing Alms for monks.

Nerves. For no reason I was nervous. I woke up at 6:00 a.m. to partake in almsgiving to Buddhist Monks. Almsgiving involves giving monks food in the early morning to sustain them for the day, the monks leave their Wat to receive the alms from people on the streets, and they bring back what was collected for themselves and others in the Wat.

Monks intimidate me. They are not intimidating people, they exude humility. It is their dedication to their beliefs that intimidates me; it forces me into the self-actualization about my level of commitment in what I believe. I have never been committed enough to appear in public as a person with no possessions depending on the goodness of others to eat.

Almsgiving would never work in America. A person on the street with the purpose of finding food, possibly barefooted and dressed only in a colored robe would be considered homeless. Even if not considered homeless, Americans would be suspicious and doubting- is this person really religious? Or just dressed this way to get something from me?

The dedication of the monks and concept of a society feeding a group of people on the street produced the personal and societal aspects to me being all out of sorts and nervous about my giving of alms.

The crowded morning market with monks on alms rounds

I am learning about Buddhism. I didn’t know about a monks daily routine, almsgiving, the reason behind wearing robes and how they interact with the public.  Monks go on a daily round of alms; each morning the monks will leave their Wat with an almsbowl. The monks will walk in a line with the oldest monks in front. People- mostly Buddhist- will place ready to eat foods in the almsbowl- generally the food is freshly prepared rice, fruit, bottled water and some meats or curry, in Bangkok the food is all individually wrapped in order to be placed in the almsbowl.

The giving of alms is not charity to the monks, but a way for a lay Buddhist to make merit by and show respect to the monks.  The monks are living from what the people provide, it forms a connection between the people and the monks.

The monks are not begging for food, the monk shows humility and detachment from worldly goods. The monks are not sitting on the streets idly begging with open bowls, alms are given in the early morning and the monks walk slowly and people that want to give them food indicate this to a monk.

The giving of alms is a simple process, even for someone that doesn’t speak Thai. I would simply raise the small bag of food (rice, curry, fruit, water) up to about my waist height when I saw a monk coming down the street. The monk would stop, open his almsbowl and I would place the package of food in the bowl. The monk would then say a few sentences to me in Thai- this is a teaching for me; while the monk is doing this you fold your hands in prayer about chin height. It is common for people to remove their shoes and kneel in the street, in front of the monk for the giving of alms and the words shared by the monk.

There is no touching or other interaction between the Monks and people, this is not a social visit and there is not small talk. It all happens very quickly. It is a bit different when a woman is giving alms to a Monk, women cannot touch monks in any way and women generally kneel in front of the monk on the street. 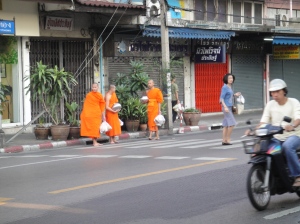 Monks returning to wat after almsgiving

The monks take the food they have collected in their almsbowls back to their Wat and share it with the Buddhist community.  The monks eat two times a day, when the monk returns he will choose some of the goods collected in the almsbowl for his morning meal and leave the rest for the nuns and staff and for other monks that could not go out for alms.

Almsgiving happens every morning- early. Generally it is best to go between 5:30 and 8:00 as the monks return to the Wat for study and do not come out for the rest of the day.

I enjoyed the almsgiving very much. Yes, I was nervous the first time and certainly being the only farang on the street and participating in the almsgiving increased my nerves. The monks didn’t treat me any differently than the Thai people giving alms, this help calm my nerves.

Thai people that were giving alms smiled at me and seemed happy at what I was doing, this effectively eliminated any remaining nerves. Almsgiving made me feel good- providing something for someone that is pursuing knowledge and that is willing to show such a high level of humility and dedication. It is more than a Buddhist event, it is a view of the humility expressed by monks and how the society responds by providing.

I began working in Bangkok during 2008- a time that featured a great deal of political unrest in Thailand and particularly Bangkok. I had lived in San Francisco for 15 years and was working on a project in Thailand. Generally, I spent 2 weeks in Bangkok and then 3-4 weeks in San Francisco. Did Bangkok begin to feel like home? Yes, and No. Bangkok and the Thai culture forced me to feel many things, the change in culture and environment was so dramatic it forced the decision- embrace or ignore. I embraced and made Bangkok my home and base in 2009. I have enjoyed living in Bangkok, experiencing Thailand and the entire ASEAN region. I moved to Singapore in 2016...fallen behind on this blog since.
View all posts by faranginbangkok →
This entry was posted in Bangkok, Buddhism, Culture, Monk, Sightseeing, Temple, Thailand, Wat and tagged alms, almsgiving, Bangkok, Buddhism, Farang, is bangkok safe, Monk, monks, relocation. Bookmark the permalink.

5 Responses to Alms for Monks