My mother sent me a package, included was a cooking magazine featuring a number of recipes that look very good. Unfortunately I will not be making the vast majority of them, I have no oven. 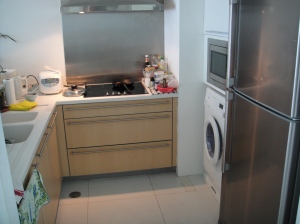 a modern home kitchen in Bangkok, no oven needed

As with most countries in Asia, an over is not part of the home kitchen; in fact, it is not part of the kitchen in restaurants. This is one of the most obvious and overlooked differences in the Western home, restaurant and way of eating compared with Asia- foods in Asia do not use flour or need to be baked.

Boil, steam, stir fry, barbeque or fry, oven not needed.   Many of the kitchens in buildings designed for farangs have ovens, lots of the microwaves have a toaster function and you can buy a small toaster- but a Thai family has no need for an oven at home.

This is the reason so much food can be prepared on the sidewalks and in streets, much easier to have a grill, boiling pot of water or pan than haul an oven around. It is also the reason the scale of kitchens throughout Asia is much smaller than in the USA and Europe- the lack of large ovens makes for a much smaller overall space.

Thai food is world class, but I do miss foods with flour, especially a good slice of pizza…oven needed.

I began working in Bangkok during 2008- a time that featured a great deal of political unrest in Thailand and particularly Bangkok. I had lived in San Francisco for 15 years and was working on a project in Thailand. Generally, I spent 2 weeks in Bangkok and then 3-4 weeks in San Francisco. Did Bangkok begin to feel like home? Yes, and No. Bangkok and the Thai culture forced me to feel many things, the change in culture and environment was so dramatic it forced the decision- embrace or ignore. I embraced and made Bangkok my home and base in 2009. I have enjoyed living in Bangkok, experiencing Thailand and the entire ASEAN region. I moved to Singapore in 2016...fallen behind on this blog since.
View all posts by faranginbangkok →
This entry was posted in Bangkok, Culture, Food & Restaurants, Thailand and tagged Farang, kitchen in bangkok. Bookmark the permalink.