Red Shirts Protest in Bangkok- How things have changed, April 27 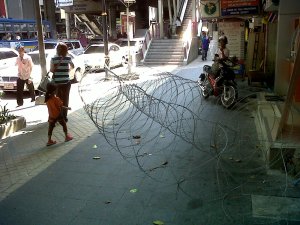 razor wire on the sidewalk in Silom

The Red shirts have widened their Ratchapasong (central commercial district) site, “capturing” additional streets and erecting blockades of the streets. The red shirts have done this to make it much more

difficult for the military or police to approach the center of the rally site. It is said the red shirts have received a great deal of training from former military leaders, based on the construction of the blockades and strategic position, this appears to be true. 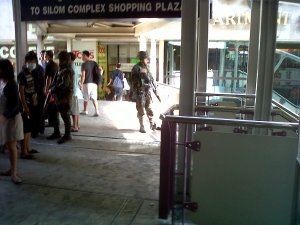 Silom appears to be a war zone, or a zone that is preparing for a war. There is razor wire on the sidewalks, military and police on the streets and in the mass transit stations. How to describe the Silom area to explain how odd this is? It is the area of town full of banks, upscale shops, exclusive hotels and one of the most popular entertainment districts- it is located in the heart of Bangkok, a midway point between the river and Sukhumvit. 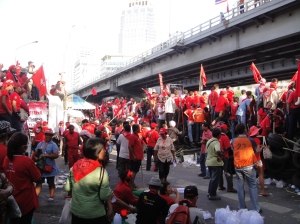 the red shirt blockade of a street

If you are not near the protest site- that now means inside the barricades- things feel much the same. Thailand is now in the middle of the hot season, this is the low time for tourism. The upheaval in Bangkok has resulted in a serious lack of tourists and areas popular with tourists and business travelers are slow. You can still find all of the Thai smiles and hospitality outside the protest zones, but things are more subdued as one and all wonder what will happen. 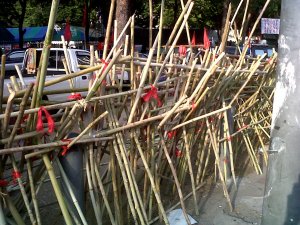 Is Bangkok safe? Yes, but one must avoid the protest sites. Is this the ideal time to travel to Bangkok? No, due to limited public transit hours, streets being closed and a general feeling of tension in the middle of the city.

Additional pictures: http://www.tumblr.com/blog/faranginbangkok For more updates about Bangkok, Thailand and other thoughts: www.twitter.com/lilrichardb I began working in Bangkok during 2008- a time that featured a great deal of political unrest in Thailand and particularly Bangkok. I had lived in San Francisco for 15 years and was working on a project in Thailand. Generally I spent 2 weeks in Bangkok and then 3-4 weeks in San Francisco. Did Bangkok begin to feel like home? Yes, and No. Bangkok and the Thai culture forced me to feel many things, the change in culture and environment was so dramatic it forced the decision- embrace or ignore. I embraced and made Bangkok my home and base in 2009. I have enjoyed living in Bangkok, experiencing Thailand and the entire ASEAN region.
View all posts by faranginbangkok →
This entry was posted in Bangkok, Culture, Politics, Sightseeing, Thailand and tagged Bangkok protest, red shirts, Red Shirts in Bangkok, Thailand Politics, travel to Bangkok now. Bookmark the permalink.

2 Responses to Red Shirts Protest in Bangkok- How things have changed, April 27