Bangkok the day after- May 20

Calm and quiet. The curfew was necessary, the total silence and darkness was shocking. There is a two year jail sentence for breaking the curfew- I didn’t see anyone risking it. No cars, no pedestrians, very few lights and silence. 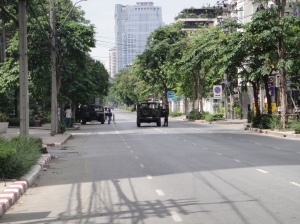 Military on my street- safe and sound

I went for a run this morning. The Thai government might not consider this an essential reason to be out of your home, but I did. I wanted to get back to my routine, show Thai people I am crazy as well. I did. Soldiers are everywhere, streets are deserted. Soldiers laughed, clapped, yelled “go man” and mostly just smiled. I smiled back, thanked them. We both knew we shouldn’t be in the streets. I ran much faster than I should have, body was flooded with adrenaline running on empty streets with soldiers sitting on sidewalks.

Once past the military checkpoints, much of Bangkok was largely unchanged. People are shocked by the events, but moving on with their lives. Thai people want to know what I think, they apologize, thank me for staying.

Please do not believe the reports on CNN about “marauding bands of red shirts” and “continued gunfire” in Bangkok today. It is not true. Please also understand the use of the term terrorist by the government when referring to red shirts; this is meant as engaging in acts of terrorism during the protest, it is not meant to imply that there are terrorists wandering the streets of Bangkok threatening the current and future safety of people.

The military is doing an outstanding job, working in vectors to secure neighborhoods and maintaining a presence in each neighborhood. They are very friendly, people are giving them food, water and just talking with them. The police are leading a great deal of the security as well.

The cleanup effort is massive- thousands of people and machines working to return Bangkok to normal operations. The damage from the fires is significant, it appears a hard core group of red shirts had been planning many of the fires. The primary group of red shirts were boarding government provided buses today and heading home.

The curfew has been extended for 3 more days, a good thing.

The divides remain, there is loads of work to be done in Bangkok, to relations between Thai people and to the image of Thailand. Today appears to be a good first step, the people in the street certainly want a return to normalcy.

The corner of witthaya and sukhumvit on May 20, cleaned up with minor damage from buring tires

Additional pictures: http://www.tumblr.com/blog/faranginbangkok For more updates about Bangkok, Thailand and other thoughts: www.twitter.com/lilrichardb I began working in Bangkok during 2008- a time that featured a great deal of political unrest in Thailand and particularly Bangkok. I had lived in San Francisco for 15 years and was working on a project in Thailand. Generally I spent 2 weeks in Bangkok and then 3-4 weeks in San Francisco. Did Bangkok begin to feel like home? Yes, and No. Bangkok and the Thai culture forced me to feel many things, the change in culture and environment was so dramatic it forced the decision- embrace or ignore. I embraced and made Bangkok my home and base in 2009. I have enjoyed living in Bangkok, experiencing Thailand and the entire ASEAN region.
View all posts by faranginbangkok →
This entry was posted in Bangkok, Politics, Thailand and tagged Bangkok, Bangkok protest, is bangkok safe, Red Shirt March, Red Shirt Protest, red shirts, Red Shirts in Bangkok, Red Shirts Protest, Thailand, Thailand Judgment Day, Thailand Politics, travel to Bangkok now. Bookmark the permalink.