Posted on October 13, 2010 by faranginbangkok

Pizza In A Cone?

Thailand has a plethora of wonderful, and sometimes exotic food. After consuming duck tongue, wild boar and cow intestines, I had thought about a “new food” blog entry.

Tonight I came upon the true strange food- a restaurant called Conizza serving Pizza in a Cone. Is that really a name of a dining establishment, or something you say when someone sneezes?

I hardly consider myself a trend spotter, but I don’t see this one taking off. Possibly the word Cone isn’t ideal? Wrap maybe? “Hey, feel like a Cone for dinner?”; “No, no, not ice cream, peperoni”. 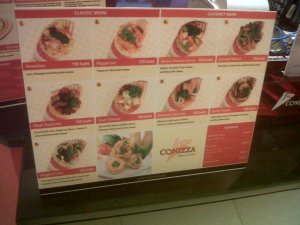 Numerous Options for your Pizza Cone

Let’s give them credit, they won’t fail due to lack of Pizza Cone options. Maybe the Pizza Cone tastes wonderful, but somehow eating a great Pizza Cone will still be inferior to an average slice of pizza.

I began working in Bangkok during 2008- a time that featured a great deal of political unrest in Thailand and particularly Bangkok. I had lived in San Francisco for 15 years and was working on a project in Thailand. Generally, I spent 2 weeks in Bangkok and then 3-4 weeks in San Francisco. Did Bangkok begin to feel like home? Yes, and No. Bangkok and the Thai culture forced me to feel many things, the change in culture and environment was so dramatic it forced the decision- embrace or ignore. I embraced and made Bangkok my home and base in 2009. I have enjoyed living in Bangkok, experiencing Thailand and the entire ASEAN region. I moved to Singapore in 2016...fallen behind on this blog since.
View all posts by faranginbangkok →
This entry was posted in Bangkok, Food & Restaurants, Sightseeing, Thailand and tagged Cone, Eating in Bangkok, Pizza, Slice, Strange Food. Bookmark the permalink.