Posted on January 24, 2011 by faranginbangkok 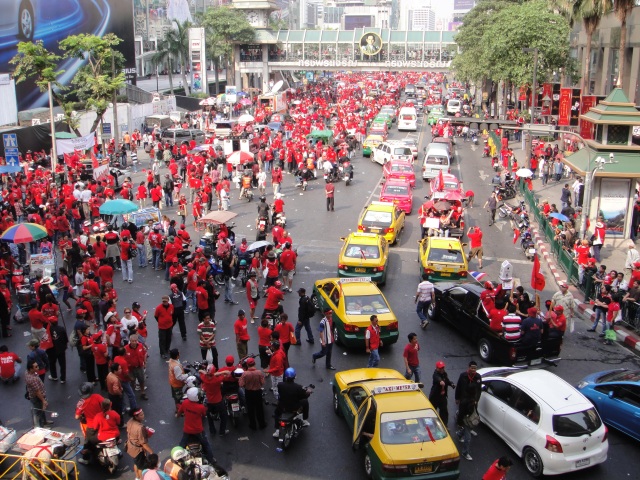 The protest was peaceful, a party type atmosphere with much music and horn honking. The primary goal is to maintain awareness about the red shirts and their agenda.

In what seems to be a major change after meeting with the shop owners and vendors around Ratchaprasong, the red shirts will only gather there once a month. Ratchaprasong is the intersection at Central World, in the heart of the Bangkok shopping district and very near the Siam shopping mall. Certainly the red shirts are trying to gain support and understand blocking a central shopping area on a regular basis will not increase endear them to many locals and business owners.

The next red shirt gather will be 13 February, it sounds as if the next gathering will be a much larger turnout.

I began working in Bangkok during 2008- a time that featured a great deal of political unrest in Thailand and particularly Bangkok. I had lived in San Francisco for 15 years and was working on a project in Thailand. Generally, I spent 2 weeks in Bangkok and then 3-4 weeks in San Francisco. Did Bangkok begin to feel like home? Yes, and No. Bangkok and the Thai culture forced me to feel many things, the change in culture and environment was so dramatic it forced the decision- embrace or ignore. I embraced and made Bangkok my home and base in 2009. I have enjoyed living in Bangkok, experiencing Thailand and the entire ASEAN region. I moved to Singapore in 2016...fallen behind on this blog since.
View all posts by faranginbangkok →
This entry was posted in Bangkok, Culture, Politics, Thailand and tagged Bangkok, Bangkok protest, current events, Farang, is bangkok safe, Red Shirt March, Red Shirt Protest, red shirts, Red Shirts in Bangkok, Red Shirts Protest, thai politics, Thailand Politics, travel to Bangkok now. Bookmark the permalink.