2011 Election in Thailand- Of Dissolving Parliaments and Rising Hitmen

Thailand will hold an election on July 3, Parliament has been dissolved.

Okay, to be clear, Bangkok is safe and the upcoming election on July 3 has not caused any disruption to life in Bangkok and most of Thailand. Oddly, it seems the Thai government and politicians want to play up the threat of violence associated with the election. I use the term oddly as Thailand depends on exports and tourism to drive the economy, you would think Thailand- like the USA- would play up safety and normalcy.

I remember the debates and news about Obama’s safety and gun laws during the USA election, with the USA saying all candidates were safe. In Thailand there seems to be a “the other side might be violent, we are not” mentality and the threat of violence is constantly in the news.

But, the country is safe enough for Parliament to be dissolved.

The knowledge of the bad guys is enough to identify 112 hitmen the government (that has been dissolved) thinks might cause violence. Now the obvious question- if you know about these hitmen, why have they not been arrested prior to the election? This appears to be a bit of window dressing to raise awareness about who keeps the public safe.

More on the hitmen: http://www.bangkokpost.com/news/local/237055/police-issue-list-of-112-hitmen-offer-cash-rewards 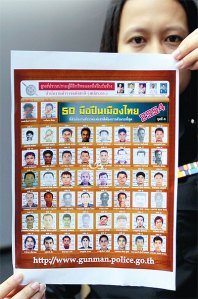 2011 is not like 2010- no massive street protests at this time. In spite of known hitmen wandering around, things feel very safe. This might be a bit of calm before the storm, all sides are waiting to see how 3 July turns out before making a big show of things.

In terms of the election results, is seems most feel neither party will win a majority, leading to a coalition government. There are many factors in the election- the urban agenda, the rural agenda, a former prime ministers agenda (his sister is running) and the ill will left from the street protests of 2010. Add to that large disparities in the wealth divide and you have a full plate of issues.

What happens? A coalition government that is similar to the current government? Probably. I don’t think many feel this election will be the end point or solution, it might be the start of the next cycle of political events that will continue as the country remains torn between agendas and issues- past, present and future.

I began working in Bangkok during 2008- a time that featured a great deal of political unrest in Thailand and particularly Bangkok. I had lived in San Francisco for 15 years and was working on a project in Thailand. Generally, I spent 2 weeks in Bangkok and then 3-4 weeks in San Francisco. Did Bangkok begin to feel like home? Yes, and No. Bangkok and the Thai culture forced me to feel many things, the change in culture and environment was so dramatic it forced the decision- embrace or ignore. I embraced and made Bangkok my home and base in 2009. I have enjoyed living in Bangkok, experiencing Thailand and the entire ASEAN region. I moved to Singapore in 2016...fallen behind on this blog since.
View all posts by faranginbangkok →
This entry was posted in Bangkok, Politics, Thailand and tagged 2011 election, current events, Farang, is bangkok safe, red shirts, Thaksin, yellow shirts. Bookmark the permalink.