Posted on June 2, 2012 by faranginbangkok

This man is not attempting to impale himself (and he didn’t), he is trying to get to Parliament. It’s not just rainy season now, it’s protest season. Or maybe it’s always protest season.

The name of the protest- Occupy Parliament- is a bit misleading as the protest is not inside Parliament, but on the streets outside. Though Parliament was disrupted inside and outside.

The yellow shirts blocked Parliament to prevent a vote on a national reconciliation bill, they succeed. As you can see from the picture, it was not easy for an MP to make it into the building, all roads and streets were blocked by the protest.

What next, who knows.

And a picture from the area outside Parliament 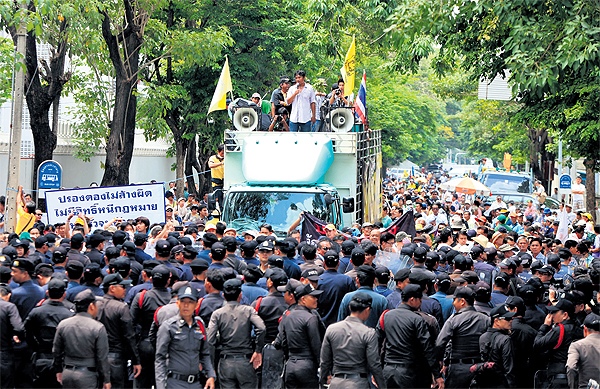 pictures from the Bangkok Post, their article and more good pics: http://www.bangkokpost.com/news/politics/296186/pad-protesters-claim-victory

Additional pictures: http://www.tumblr.com/blog/faranginbangkok For more updates about Bangkok, Thailand and other thoughts: www.twitter.com/lilrichardb I began working in Bangkok during 2008- a time that featured a great deal of political unrest in Thailand and particularly Bangkok. I had lived in San Francisco for 15 years and was working on a project in Thailand. Generally I spent 2 weeks in Bangkok and then 3-4 weeks in San Francisco. Did Bangkok begin to feel like home? Yes, and No. Bangkok and the Thai culture forced me to feel many things, the change in culture and environment was so dramatic it forced the decision- embrace or ignore. I embraced and made Bangkok my home and base in 2009. I have enjoyed living in Bangkok, experiencing Thailand and the entire ASEAN region.
View all posts by faranginbangkok →
This entry was posted in Politics and tagged Bangkok, protest, Thailand, yellow shirts. Bookmark the permalink.