Posted on December 13, 2012 by faranginbangkok

Sunset In Rayong- no filter needed

It seems that most people- aka tourists- only visit Rayong to reach the pier where boats depart for Koh Samet.  And that’s a shame, Rayong is really nice, still very authentic and has a lot of offer. Koh Samet is good island to visit, touristy, but nice and visitors are ‘captive’ on the island, price go up, quality of food and such might come down.

If you want a quick trip to the beach, want great food and want to keep things more “Thai”, check out Rayong. The beaches are nice, not like the big white beaches in the south of Thailand, but nice. The food is outstanding, loads of great, fresh crab that is very inexpensive and some really nice fish, squid and prawns as well.

There are international hotel chains, and they’re nice. Most of the hotels are located on the beaches just outside the town of Rayong. You can also stay in some really nice locally run, smaller hotels- more boutique, many having beach front access. If tired of the beach, take a trip to some of the local Wats or head into the town of Rayong (where the pier to Samet is) as there are some good markets and outstanding fried durian chips for sale.

There is also an aquarium, but haven’t tried that.

I drive, it’s about 2 hours (185 kilometers) from Bangkok and very easy. The car is useful to have as I stay about 10 kilometers outside Rayong and can then drive in, find the good local eats and explore the area during the day; there is a great waterfall and state park about 40 kilometers away.

If you have a few free days and want to head to the beach and want something a bit more local, try Rayong. Of course you can always take a day boat trip from Rayong to Samet as boats run frequently.

More of my pictures can be found on my Tumblr page. 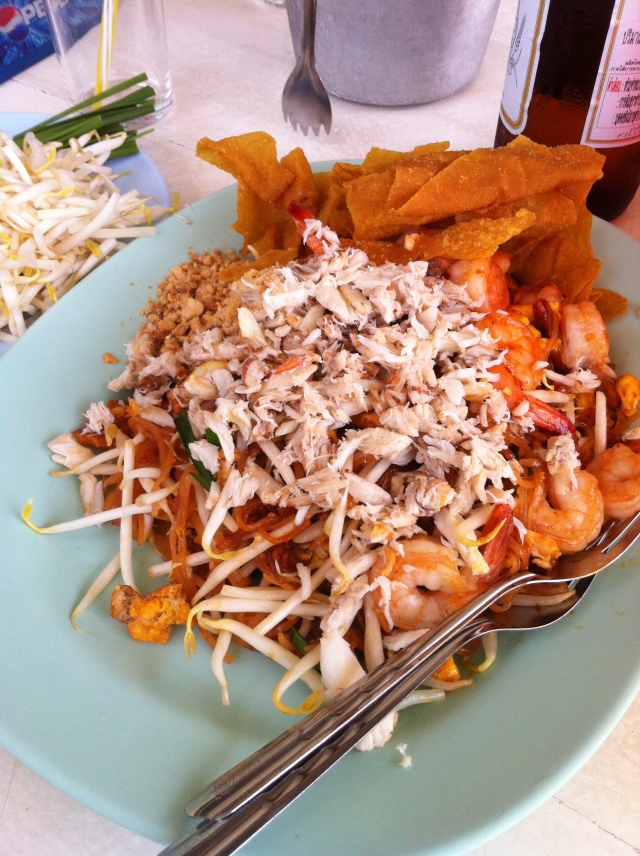 That’ll be a crab and prawn pad thai. Absolutely great.

I began working in Bangkok during 2008- a time that featured a great deal of political unrest in Thailand and particularly Bangkok. I had lived in San Francisco for 15 years and was working on a project in Thailand. Generally, I spent 2 weeks in Bangkok and then 3-4 weeks in San Francisco. Did Bangkok begin to feel like home? Yes, and No. Bangkok and the Thai culture forced me to feel many things, the change in culture and environment was so dramatic it forced the decision- embrace or ignore. I embraced and made Bangkok my home and base in 2009. I have enjoyed living in Bangkok, experiencing Thailand and the entire ASEAN region. I moved to Singapore in 2016...fallen behind on this blog since.
View all posts by faranginbangkok →
This entry was posted in photographs, Quick Trips From Bangkok, Thailand and tagged beach, rayong, samet, sunset. Bookmark the permalink.